A Sword is a Sword

With no surprise, especially considering the title of the article and the blog, this article is about swords. But it is not just about them as objects alone, singularly, or pointing out one type of sword. It is an examination of swords in general. People, when they discuss sword, especially if they have anything to do with them in hobbies or study, are quick to separate and isolate them by function, culture and type. This discussion is designed to break down some of those barriers, to look at swords as swords.

The discussion which follows is more curatorial than social or practical, though both social and practical elements will come into the discussion. It is difficult to discuss swords without swordsmanship. To attempt such would be like attempting to discuss cars and their performance without discussing driving. There will not be a history of the sword, nor will there be any discussion of any particular type of sword, in fact this is exactly what this discussion is trying to get away from. The purpose of this discussion is to present the similarities between swords, rather than their differences so that they can all be appreciated with equal worth.

All define the sword as a weapon, all define it as having a long blade. Interestingly, in two of them they specify a metal blade. Two relegate the weapon to the past, while the other attributes symbolic meaning to the weapon, thus giving it some use in the present. What will be noted in all of the definitions is that they are very rudimentary, though they do have some specificity to them. Depending if one or another of these definitions is chosen, some types of sword may actually be not included in their definition. The most extreme examples would be the non-metalic swords used by some islanders and also pre-colonial peoples. Care must be taken in a definition.

A sword, could be described as a weapon with long blade designed for cutting and/or thrusting, which has a hand grip of some fashion. However specificity in length of blade could create questions as to where a weapon crosses the line between a knife and a sword. Then there is the question of weapons such as the "messer" which was a large knife, but was the length of a short sword. It needs to be noted that the definition of the sword is not as easy as it might sound.


Sword is a Sword

All swords are swords, regardless whether it is a sabre or a rapier, katana or a schiavona, it is a sword. We are the individuals who divide them up and show them to be different in shape, or nationality, or use, or period, or whatever. In all cases all of the weapons which have been named, all six of them are swords. Obviously we divide them up so that it is easier to understand what we are talking about, but sometimes this creates confusion if a person does not understand what the other person is talking about. The most important point that needs to be made is that they are all swords. Regardless of which period of history, or from which culture, they are swords.

"The difficulty of treating the Sword is enhanced by the peculiar individuality which characterises it, evidenced by an immense variety of physique, and resulting as much from unconscious selection as from deep design. One of the characteristics of indigenous art is that no two articles, especially no two weapons, are exactly alike; yet they vary only within narrow and measurable limits." (Burton, 1987:xxi)

Burton (1987) is describing how swords are both complex articles in which no two are exactly the same, but at the same time all fall within a certain level of variation. It is this second point which needs to be noted. There are similarities across swords which cannot be denied. They all have blades and hilts, obviously, but a person can get even deeper in the examination of the similarities. The cross-guard is also a similar item. In some cases it may be a part of the handle, but it is still present, if in a reduced form. In the case of the katana it is the tsuba, thus a circular cross-guard, which would seem somewhat contradictory. The pommel is also present, it is the part of the sword which holds the rest of it together, and in the western versions adds counter-weight. In the katana this is the kashira. 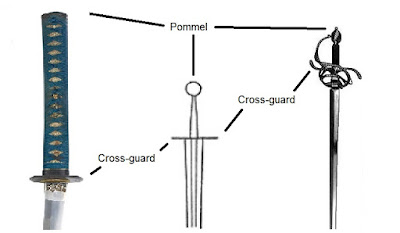 These similarities which have been pointed out, only are those in the hilts of the weapons, the blades also have similar characteristics as well. All have a strong, weak and a middle portion of the blade; these are all relative strengths in comparison to one another. The strong is most used for defending, the weak is most used for offending, and the middle is most used for controlling actions of the opponent's weapon. When it comes to the question of edges, the weapons do have at least two edges, even though one of them may be blunt. Even this blunt edge can be used for actions against the opponent, such as parrying and actions of control. These similarities in physical form need to be noted and appreciated.


Shape, Use or Culture?

Swords have been classified and organised into groups often by specific shape, function or culture. The question is what is the best method of classifying them, is it one or a combination of these methods. Burton (1987) suggests two which are common among collections being Topical and Geographical or Material and Formal, the former considers the culture, location, place and date, the latter which only considers the objects themselves (Burton, 1987:xxii). Obviously both have their advantages and disadvantages. Coe et. al. (1996) use a more combination system taking into account both the artefacts themselves along with the cultural situation in which they were found in, thus taking advantage of both approaches described by Burton (Coe et.al., 1996:6).

The combination of classification of weapons has the advantage of not only examining the objects themselves and examining them for construction, shape and manufacture, but can also look at the culture in which they were found and look at their use, which is often sorely missing in curatorial approaches to weapons. This missing approach leads these curatorial approaches to divide swords down definitive lines which are not actually there, due to misinterpretations as to how the weapons were used.

Some weapons were more specialised in a single area of use than others, this is undoubted. A perfect example of this is the estoque, or tuck, which was designed to be used by an armoured combatant against another for a thrusting attack designed to pierce through gaps in armour. The weapon had no edge, so there was no chance that there was any chance of cutting ability. Often this is claimed to be the origin of the rapier, however that it is a weapon designed for armoured combatants makes this a somewhat spurious claim.

The rapier is a classic weapon for the abuse of weapon historians about its use. For some it was a purely point-orientated weapon which could not cut at all. For others it could cut just as easily as more military-styled weapons which were its contemporaries. Neither of these is accurate. The rapier was a point-orientated weapon, meaning that it was designed more for the thrust than the cut, but it could still cut, just not as well as a military sword of the same period, it was designed for civilian duelling and self-defence.

On the other end of the scale some would attempt to have us believe that the longsword was purely designed for cutting and that it did not thrust at all. Longswords came in several different forms indeed Oakeshott numbers twenty-two different types of sword in the medieval period (Oakeshott, 1998:24), thirteen of which could be claimed to be longswords. Some of these were predominantly cutting weapons, but that is not to say they did not have a tip to thrust with, and some of them were more designed to thrust with also. So, needless to say, it depends on which form of the longsword is being spoken about.

The sabre is in a similar situation, it can also thrust as well. No doubt Oriental weapons have the same spurious claims been made about them. These arguments will not be discussed here as I do not have the expertise in this field. Needless to say, weapons need to be examined carefully before claims on their use are made, especially when it comes to specialisation.

Each person has their preferences. Some people prefer chocolate ice-cream over vanilla, some people just don't like ice-cream at all. Preferences for swords are much the same, just because you prefer the longsword, does not mean that you cannot appreciate the jian, katana, gladius or rapier. Each sword has something to say about it and of its use. There are many similarities between weapons which can be appreciated.

Each sword was a tool designed for its time and place, to take it out of this time and compare it to something else, to deride it is not useful. Placing a sword on a modern battlefield and trying to compare it to modern weapon systems is like trying to take an apple and compare it to an orange among other oranges. Sure, both of them are fruit, but they are simply not a good match for comparison unless the question is for preference about fruit, not the best orange.

The greatest challenge we face is to get out of our comfort zones, and in some cases these comfort zones are quite small. Have a look at some others swords and appreciate them for what they are and what they can do. Make comparisons of them with swords that you are familiar with, but not for the purposes of derision, but for the purposes of noting similarities and other positive notes. This way you will come to appreciate more weapons and also the skills that go along with these weapons. Remember that the two deciding principles of time and distance exist for all martial arts armed and unarmed, you can learn something from all different places if you really put your mind to it.

Oakeshott, E. (1998) The Sword in the Age of Chivalry, The Boydell Press, Woodbridge

Merriam-Webster Dictionary (https://www.merriam-webster.com/)
Posted by Henry Walker at 12:00 AM No comments: