One of the great joys that I take as a trained historian is debunking myths. One of the reasons for this is that there is nothing like a good historical argument, backed by evidence. The other real reason is that I like seeing the correct information going out into the public sphere for people to access. This would be the reason why I wrote one of the recent posts about curatorial elements of the sword. It also irritates me a little when people continue to spread myths around because they are just too lazy to get off their butts and do the research.

When we see ladies in reenactment we often see them dressed in dresses playing the part of the lady, as the public expects. Less often we see them in armour, but it is spectacular when they are dressed in armour and are fighting. Something which I support completely. There is a modern myth that ladies in the medieval period did not engage in combat and were not trained to do so. Yes, it is a myth.

The question of the shield maiden is something which has been brought up again ever since the series "Vikings" has become popular and there are arguments for and against their existence. There is some archaeological evidence for their existence and quite a bit of folklore to go along with it. For your convenience, if you click on "shield maiden" (above) you will find the Wikipedia site for it and I would use this as a launch-pad for future research.

The Elizabethan Era is one of the most well-known for swordplay due to the duel occurring and of course the plays of Shakespeare and the London Masters of Defense. What has also been documented is that Elizabeth watched the playing of several Prizes of the London Masters of Defense. A candidate would play a "Prize" to gain his next rank in the organization. A list of prizes which were played can be found here. If nothing else this shows Elizabeth's interest in swordplay. What's more, it is rumoured that she also encouraged her ladies to be trained with the sword as a sort of "last defence" bodyguard and also for their own virtue.

We live in a pictorial age and many people are driven by what they can see. So often we hear "Pictures or it didn't happen." Well, supporting this particular contention which is being presented is pictorial evidence from some French manuscripts. The first is from Bibliothèque Sainte-Geneviève  MS.1126 "Roman de la Rose" 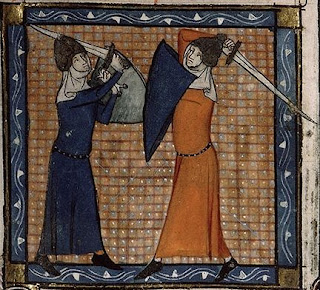 This image clearly depicts two women crossing swords while dressed in civilian outfits. This would mean that it is most likely that they are in training rather than actually fighting. It is, however, a clear demonstration of a training scene of females being trained in combat. An image which points more toward them being engaged in actual combat follows below. 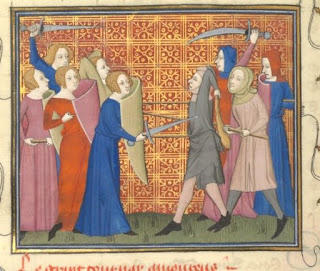 The women in this image on the left seem to be defending themselves from the group on the right. While these individuals are wearing civilian clothes, it looks less like a training scene and more like that they are defending themselves from a group of bandits. This image is also from a French manuscript of the fourteenth-century. While this image could be mistaken form some sort of training or game, the following image is less likely to. The original manuscript in this case is from another fourteenth-century French manuscript, but can be found along with several other images of women in armour on the page Babes in Armor, which is a celebration of women in armour. That this image shows the individual in armour leaves no doubt that the individual is in a situation where she may come to harm. This would seem to break the myth that women did not put on armour and did not use weapons. The final image which I have will give those who do not think that the medieval female had training some real pause for thought. 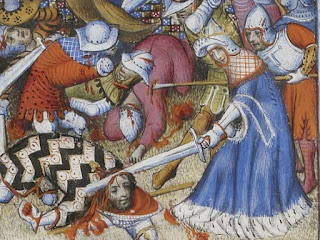 This image is from "De Mulieribus Claris" (BNF Français 598), and clearly depicts a woman in armour and involved in the combat. That she is present on the field of combat should give one pause for thought. That she is using the weapon she is armed with and doing harm means that she is at least trained with the weapon.

We should all be careful about making large sweeping statements about things which did or did not happen in the past. It goes especially much where there is evidence for both sides of the argument present. We must all ask ourselves what influences would be making us take either side of an argument and why this is. Is the answer we are giving going to benefit or detract?

Just from the evidence presented here, I would think that some would at least consider re-evaluating their positions with regards to women in history and their positions. The female in the medieval period was obviously not barred from training in weapons, but may not have chosen to do so. Thus we must consider what position the individual was in to make this choice, if they had one at all. We should all do our best not to perpetrate, and perpetuate myths from any period of time as they muddy the history and give misdirection to our future researchers.

You can view the Second Part of this discussion, with more detail and research here.
Posted by Henry Walker at 12:00 AM 2 comments: