The following discussion will be about armour and "armour" as it stands within the HEMA (Historical European Martial Arts) community. The thing is that there seems to be some funny ideas floating around about what armour is and what it does and how it relates to what we do. Hopefully this discussion will clear up some of these issues and clear up some of the confusing terms which have been used. 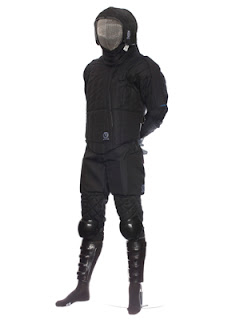 The image to the left is the full Titan range which is made by Leon Paul in London (Yes, I have noted the lack of shoes on this model). It is designed for the protection of various parts of the body for people who participate in HEMA. This is not armour. 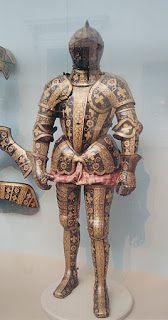 The image to the right is an armour of 1585 for Lord Clifford. This suit is ostensibly for the sport of tilting due to the helm which is fitted to it, and the decoration which is on it, but it could have also seen battle and protected its owner very well. This is armour.

Most of the combat which is being reconstructed by the HEMA community is based upon combat which is focused on unarmoured combat, thus not dealing with armour. When a person discusses "armour" on a forum when discussing their protective equipment, implications in the word can be made. Implications that they are taking their equipment to being like the picture on the right, which it is not. Does this mean that they are also assuming the same of others? This brings up the question of what level of strikes should be accepted.

The idea of unarmoured combat means that a much lower level should be accepted while "armour" gives the automatic idea of a much higher level of strike. The question of calibration or what level of striking has already been brought up in a previous post. This idea of the use of the word "armour" puts an idea in people's heads about what they are using and what they are using it against, even if it is not true. Somewhere in the back-brain "armour" gives automatic idea a harder hit is required. Simply put armour is not being worn.

If armour is not being worn then the name should change when discussing the subject. Some expression to cause less confusion and to prevent the idea that the harder strike is required so that the opponent can feel it through the "armour". A suggestion is that the name be changed from "armour" to "protective equipment" as this is a description of what it is.

The extra padding and certain rigid materials are designed to protect the individual from damage, not to prevent them from feeling the blow. Examine where the heaviest armour is placed in HEMA protective equipment and you will find that it is designed to prevent the wearer from getting permanently injured. Sundry areas are protected by padding.

A change from the use of the word "armour" to the more accurate "protective equipment" will be better in the long-run as it more accurately reflects the state of play, and will be a reminder as to what the equipment is for.