I feel that I need to add a special note with regard to the language which I use in my blog posts. This applies to all of them future and previous. I tend to use the male form, i.e. "he", "man" and so forth. In no way should my female readers feel discouraged in that these posts do not speak to them. I use the original Latin root forms of these words with their original intentions. Thus in the case of words such as "chairman", the "man" part of this comes from "manus" to operate rather than any indication of a male form. 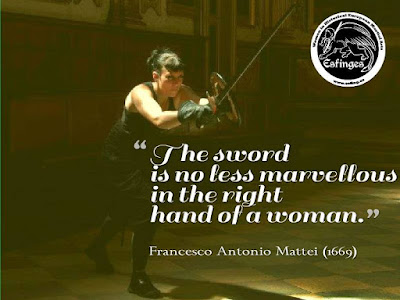 I am a firm believer in the quote presented in this marvellous picture from Esfinges. As will be noted from my previous posts in three parts about "Females and Fencing" I believe that women have the capacity for excelling in HEMA as much as men do. I feel that it is necessary that I state this as a special mention at this point in time as I believe that I have attracted some new readers and I would like to keep their interest and not discourage them.

Posted by Henry Walker at 12:36 PM No comments:

Study of the Smallsword

Most of you know that my posts mostly focus on Renaissance rapier, and other Renaissance weapon forms. Well, I must announce something of particular interest. Over the past months I have been doing study into the Smallsword, with the aim of learning how to use it, based on research from manuals left behind.

Now some will go, "Well that explains that." Especially if you are on Facebook and have seen my posts about my new smallsword which I had made by Tim Harris. It is a beautiful weapon. The weapon is light and moves wonderfully. It was exactly what I asked for. Tim, I thank you for your excellent work, again.

I have, as per usual, been focussing on manuals which were published in English in their time. This means that I am not using any modern translations of manuals from the period. In some ways this was to limit my options as to what I was looking at. More to the point, it was designed so that I could look at manuals in their as close as possible original form with the author's words in as close to the original form as possible. This allows for the least amount of "noise" in examining the works.

In my study of the smallsword so far I have found that, much like the rapier, the weapon is not ubiquitous. There is no one smallsword which covers the entire period in which it was used.  This is not only by the design of the weapon, but also going by the use of the weapon. As a result, when discussing the smallsword, one needs to be a little careful. From my research it should really be divided up into "early smallsword" and "classic smallsword".

With this being the result of a small part of the research that I have done, it looks like that should I decide to include the entire weapon into my own curriculum, I will not be studying one weapon but two. This also poses a very interesting situation for discussions of the weapon, and its use in that we should really be specific about the weapon being used, and also the period which it came from.

I had intended this post to contain some of the curatorial information about the smallsword that I have found, but that would make this post much too long, so I will save that for another one. Needless to say the information and research that I will present about the smallsword will divide the weapon into two parts, maybe without a clear line, but it will demonstrate two different weapons, called the same thing.