Well, after some writing, collating, and quite a bit of editing I have created a book version of several of the posts which have been made here. Some people asked me to do this as they found that the articles were quite useful and they would be even more useful in a book format. Well, you got your wish. The book was published on 15 March 2019, you may have seen the advertisements at the bottom of some of the posts for my GoFundMe to raise money to get the book published. These will give you an idea of some of the articles which appear in this book. If you have enjoyed reading my posts you will enjoy reading my book. It includes a Foreword by Keith Farrell.


"“A Fencer’s Ramblings” is a blog which was started in May 2010 to spread knowledge about the subject of Historical European Martial Arts, and indeed fencing in general. While there is a definite bend toward particular areas, nationalities, and forms, this blog has covered many differing subjects. What is contained within this book is a selection of the articles which appear on this blog, along with some extra articles of interest by the author. These have been updated and slightly re-written to suit their normal format, but they still retain their original purpose, to inform and educate the reader about various elements of the subject of fencing, which in and of itself must be taken from a broad point of view. Some of them are conversational others are written from a more academic point of view, this selection contains something of relevance for anyone who is interested in swords or swordplay." 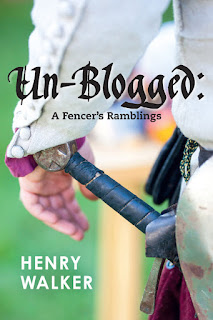 This book is available from Book Depository, Fishpond, Amazon, Waterstones among other retailers. At my last check, they can get the book delivered to you cheaper than I can.
Posted by Henry Walker at 8:09 AM No comments:

Some Points of Fencing Etiquette

There is a certain flavour to swordplay, and an expected code of conduct which is seen. This is one of the things that differentiates it from just two combatants beating the snot out of one another with swords. Many of these elements of etiquette are common knowledge, but some, it would seem, are not so common and need to be brought into the light. I have previously written a rather long discussion about fencing etiquette if you're interested, it can be found here. Needless to say this is a big thing for me.

At the beginning of a bout the two combatants salute one another, this is a sign of respect and thanks for their presence. Any officiating staff or an official table can be saluted as well, this is also a sign of respect and thanks. Once the bout has concluded the two combatants should handshake at the end of the bout to thank each other for the bout, all this is usual stuff. None of these actions should display any attitude toward the opponent or how well the fencer did during the bout. More to the point, these actions should be done regardless if the officiating staff directs the fencers to do so or not. It is just being polite and keeps the bout civil. This is all expected sort of stuff, which most fencers who have been about for a while would know.

Before all of this happens, there are some important steps that need to happen. Firstly, if this is the first time that you are meeting this particular opponent. It is good fencing etiquette to go up and introduce yourself to them. This is a good way to get the measure of your opponent and also break some of the tension. Even when the tournament stakes a relatively high, they are not to the death, and when they were the two combatants knew one another by name. It also means that you will know who you are fencing next time that their name is called, and it is also more likely that you will be able to discuss the bout afterward in a friendly manner. Friendships can be made by such a simple introduction.

With regard to introductions there is another step that needs to be made. When you arrive you should go and introduce yourself to the tournament officials and thank them for running the event. This will instantly put you on their radar in a positive way. When another school is running the tournament, you should also go and find their head instructor and introduce yourself to them, this is simply being  polite.

If you are a head instructor of another school then this is even more important so that the other head instructor knows who you are. This way they know who to contact about disciplinary actions and also commendable actions performed by your students. If you merely just hang around with your students and other school members no one will know who you are, and if you then start giving instructions, offence may be given. This is an element of fencing etiquette which ensures smooth communication between participating schools at tournaments and builds a community spirit among them. It is vital to remember that fencing etiquette applies to all and that students will learn the keys of this from their teachers and thus they need to be examples for their students to follow.

There are designated safety officials at events, sometimes they are called Safety Marshals, sometimes just plain Marshals, either way, these individuals are the individuals who take the official burden of the safety of the event upon their shoulders, and it is not an easy task. What is even more important is that safety is everyone's concern, thus by default everyone is a safety official. If you see something which is of a safety concern, you are expected to call it. No one is going to complain if a bout is briefly halted due to someone being concerned about safety. Don't wait until it becomes a real issue stop it early. What is this doing in a discussion about etiquette? A person who does not assist where it is required in this area and leaves an incident to happen, which they could have stopped, breaches etiquette by their silence. There are times when staying silent is worse than standing up and saying something, and this is one of them.